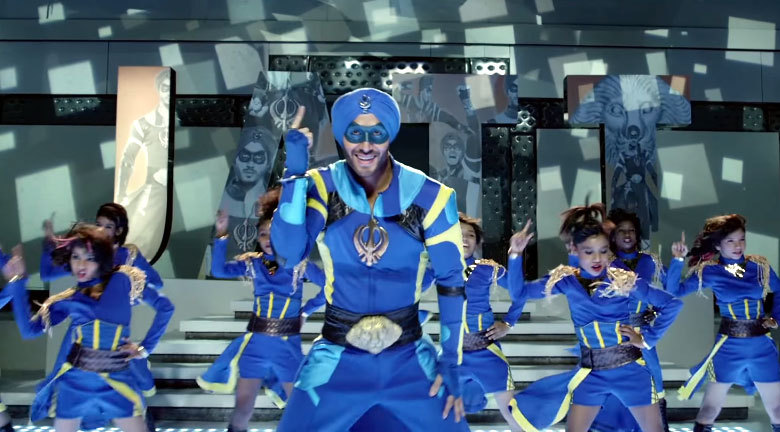 We joined leading British Asian creatives and talents to attend a Special Screening of Bollywood superhero film, A Flying Jatt, at Cineworld Wembley in London on Thursday 25th August. Among an array of the Brit Asian Pack were one half of Signature dance-duo, Madhu; celebrity magician, Magic Singh and celebrity Henna Artist Pavan Ahluwalia to name a few.

Remo D’ Souza’s A Flying Jatt revolves around Malhotra (Kay Kay Menon) who wants to obtain Kartar Singh Colony’s land at any cost, so he can build a direct bridge through it to improve his empire’s logistical efficiency. The land is owned by Amaan’s (Tiger Shroff) late father. Amaan’s mother won’t let Malhotra take over their land no matter price he offers, due to a mystical tree deep-rooted on the land, which claims to make wishes come true. In a bid to take over the land, Malhotra calls in Raka (Nathan Jones) for his assistance to destroy tree, but that very night all things take a turn for the best and worst.

Tiger Shroff (Amaan) yet again proved his distinct ability to do stunts, with martial arts under his belt, all his action scenes conveyed as first nature to him on screen. Nathan Jones, an Australian actor, former pro wrestler and WWA World Heavyweight champion played as the menacing villain, Raka. What a debut and mark he has made into Bollywood, Jones portrayed Raka superbly, he is certainly one villain we would not want to mess with! We hope to see him in more villainous roles in the future! The versatile Kay Kay Menon (Malhotra) plays the greedy mastermind brilliantly. Amrita Singh shines in A Flying Jatt as she plays one kick-ass Punjabi mother! Gaurav Pandey who plays as Amaan’s brother stirs most of the humour in the movie. He certainly won our admiration as an audience, we look forward to seeing his future work. Lastly, Jacqueline Fernanadez (Kirti) we was slightly disappointed with, as her character was as a cliché damsel.

The film’s soundtrack by Sachin-Jigar is an all=rounder, with a track dedicated for every mood.  “Toota Jo Kabhi Tara” and “Beat Pe Booty” made it among our favourites! A Flying Jatt was overall a superb entertainer, however the film’s ending and special effects let it down! Despite this, the action sequences left us awed and the comedy scenes left us chuckling, we had not seen movie that has made us laugh out loud in such a long time! Each character had their chance to shine and the dynamics between all characters were spot on. This film is a decent family watch, where the actors give the film all its’substance.

Director Remo D’Souza shared that, “Superheroes are all powerful and all encompassing –but Flying Jatt is all adorable. He is the most humane superhero and while he goes about his duties, his quirks and reluctance is a new dimension to the superhero genre. “

A Flying Jatt is now in selected cinemas across the UK.