Akshay Kumar, Bhumi Pednekar, Anupam Kher, producer Neeraj Pandey, descended to London for the International Media Conference for Toilet: Ek Prem Katha, as anticipation for the film’s release on 11thAugust 2017. Media from around the globe descended on London, as the leading stars of the film took part in the first and official media conference and Q&A. Here is a little snippet from the press conference!

Set against the backdrop of Indian Prime Minister Narendra Modi’s initiative to improve sanitation across India, ‘Swachh Bharat Abhiyan’ (‘Clean India Movement’), Toilet: Ek Prem Katha is a satirical and light-hearted take on open-air defecation in India, and the fundamental need to provide households across the nation with a functioning toilet.

Speaking about the importance of the issues raised in the film at the media Conference, the film’s lead Akshay Kumar said, “Last year the government made around 300,000 toilets. The problem is not about infrastructure, but that people themselves don’t want to use them, because of their mind-set; they feel the freedom lies in them defecating in the open.” Kumar added, “This is a special film for me.” 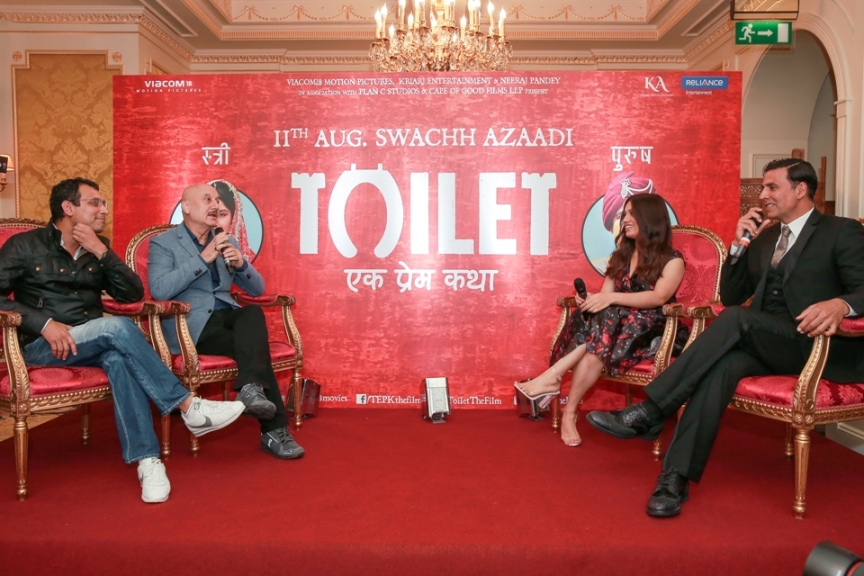 Talking about performing a scene where the lead actress Bhumi Pednekar had to enact defecation in the open, something millions of women experience daily, said, “Personally, the toughest scene that I have ever shot in my career was when I had to actually perform the scene where I was defecating in the open and I just couldn’t do it. There were hundreds of people in front of me and even though I was acting, as a girl it took such a big toll on my self-respect, I felt violated.” Speaking about the film, Pednekar said “Toilet EPK is an extremely important film for us and whenever you watch it I hope you like it.”

Speaking about the social messaging the film offers, Anupam Kher said, “This movie is an effort to make people aware that the act of open-defecation should not happen. It should be the people’s constitutional right, it should be the birth-right for a child to be able to have a toilet.”

The film’s producer Neeraj Pandey spoke about the role of filmmakers in making films with social messages, saying, “I believe that as story tellers it is imperative that we talk about issues and things that leave an impression…with TOILET: Ek Prem Katha, we have tried to leave an impression and leave something for the audience to talk and think about.”

Directed by Shree Narayan Singh, best known for his work editing smash hits such as Baby and M.S Dhoni: The Untold Story. Toilet EPK is not to be missed, be sure to catch the film’s release in selected UK cinemas on 11th August 2017!